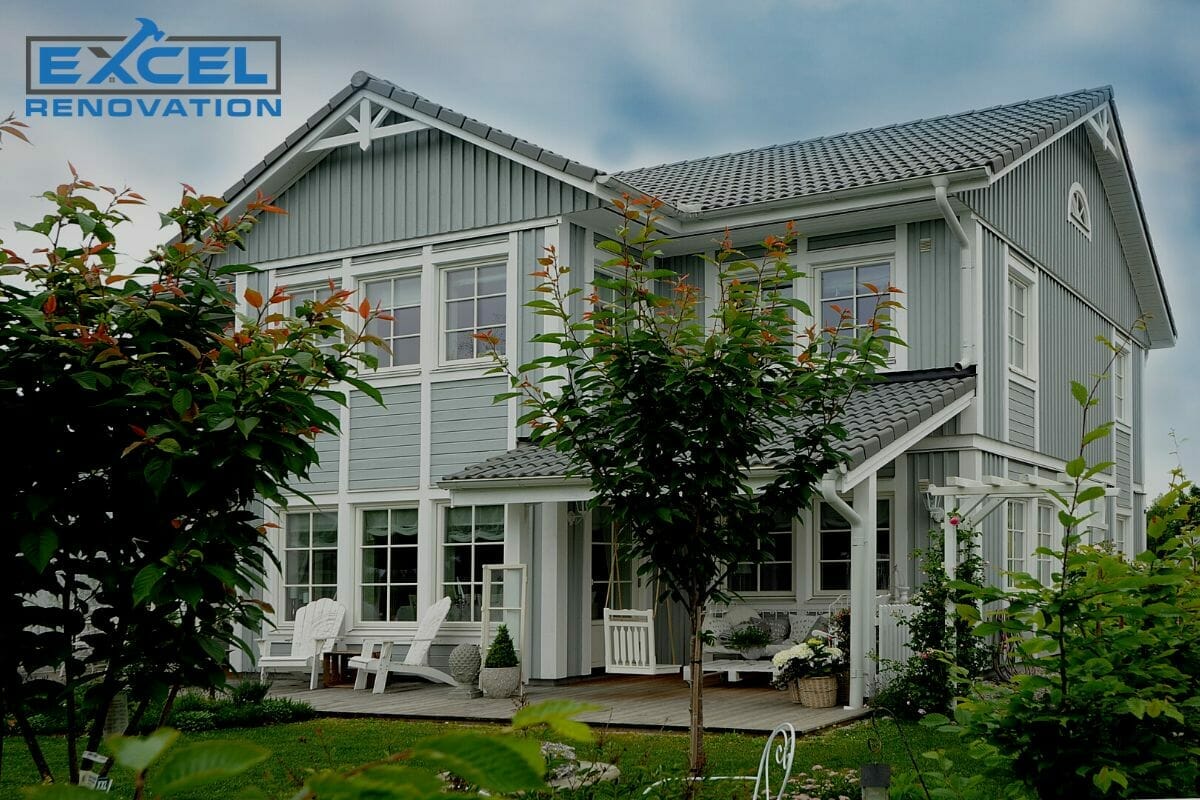 As a homeowner, you want your home to be a beautiful and inviting space. Your roof is an important factor if you’re trying to sell or rent out your property. Roofs can affect 30% of your home’s curb appeal, and unique roof types are eye candy for many people in your neighborhood.

Having a roof with distinctive features makes a huge difference and is often treated as a masterpiece. A unique roof design will immediately grab the attention of potential buyers before they even step inside. Moreover, a unique roof reflects your personal style and makes you feel more at home in your residence.

So, what roof style would be the best for your home? Take a look at the following 11 classic and modern roof designs:

Gable roofs are easy to build and due to this, they are the most popular roof type found on homes nationwide. Your current roof and those of your neighbors are probably gable roofs since most single-story, or ranch-style homes, utilize this classic style. The structure of a gable roof involves two slopes that share a ridge line. A gable roof may not be unique, but everyone enjoys the homey, welcoming, and subtle feel of a home with a gabled roof.

Plus, how you design your fascia and trim can make all the difference. Architectural bargeboard trims and contrasting color schemes are two ways to adorn a gable roof in your own special way. 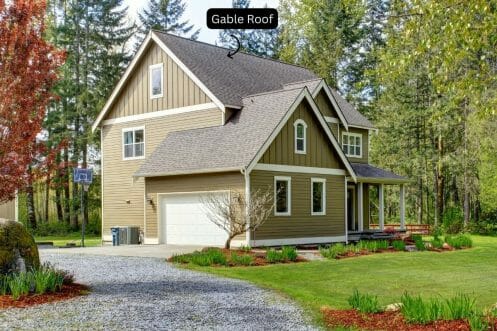 A hipped roof is the second most popular style of roof in the United States. Such types of roofs have four slopes in each direction. Hip roofs are more common on mansions, resorts, and large-scale homes. The four slopes create a more elegant and stately appearance, vacating more space in the upper portion of the house. Hipped roofs are gaining more popularity among homeowners who want to add more room, value, and style to their homes. 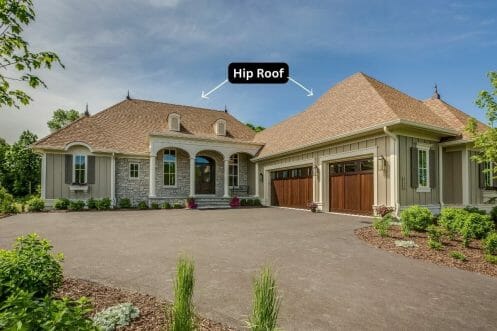 Pyramid roofs have a cone-type structure with a common pointy, central peak. Such home roof types complement the extended and smaller sections of the house in a magnificent way. For example, dormers, an extended gallery, or an outward stairway look great when matched with a pyramid roof style. You can also have a pyramid roof covering tall, narrow spaces like turrets. Turrets are small towers usually found at the top portion of a house, or on the exterior wings.

The pyramid style has been used in architecture worldwide for centuries, most prominently in Middle Eastern cultures like Egypt and Morocco. You can also embellish the roof’s peak with a traditional or unique ornamental element, such as a finial, or a flag to create a statement for added flair. 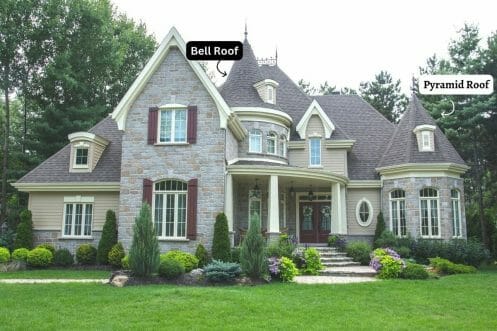 As the name suggests, a bell roof is shaped like a large bell. This roof design is popular in Mediterranean-style homes and large-modern houses. Bell roofs are used to cover smaller structures of the home and accommodate many windows. Like a pyramid roof, a bell roof is also suitable for adding style to roof structures like dormers and cupolas. This type of roof can even be found in your backyard if you own a gazebo.

Both bell and pyramid roofs are traditional elements of a belvedere structure. Belvedere is an Italian term for ‘beautiful view’, and was a popular architectural style in the renaissance period. A belvedere is an elevated structure on a house, sort of like a tower, specially built to create a space that’s well-lit, properly ventilated, and provides a high vantage point to take in the surrounding view or neighborhood.

Gambrel roofs are classic colonial roof types with multiple variations ranging from Dutch and French styles to the modern-traditional look. This type of roof combines a gable and mansard roof style with slopes on two sides of the home. The distinctive feature of all gambrel roofs is that each slope has two or more points at which the inclination or angle of the slope changes. The upper slopes have a lower, or flat pitch, and the lower slopes are steeper. 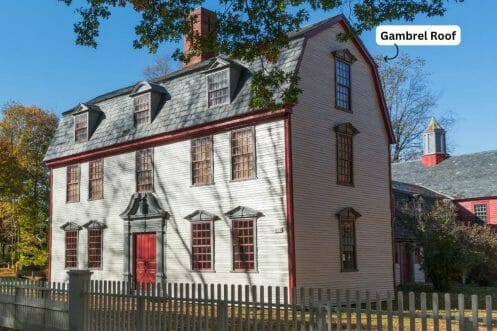 A mansard roof is a type of four-sided gambrel roof. Around all sides of the roof are two slopes, with the lower slope being steeper than the upper one. In fact, the upper slope appears to be flat from afar. Mansard roofs were initially used in France during the 16th century and later were named after François Mansart, a 17th-century French architect who popularized this roof design in Paris hotels and châteaus.

Mansard roof styles gained popularity in America during the 19th century when French-inspired architecture became famous for its association with classicism and luxury. Most mansards were built between 1890 and 1930, the era when industry inventions and population size boomed. Today, we have a more evolved and modern version of the mansard roof, with a few contemporary homes having a more subtle and elegant version of this roof type. 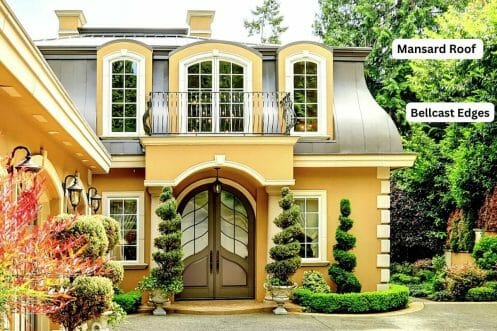 This design can be blended with an existing roof type (gable, hip, gambrel, or pyramid), creating an all-new style. Bellcast roofs incorporate the lower portion (rim) of a bell in their design. In the U.S., bellcast roofs usually have slightly curved eaves with a less panoramic arch. This is essential to ensure that ice, snow, and water don’t accumulate at the edge. Apart from the outward eave design, there are many more versions of a bellcast roof, from traditional Asian architecture to French country-style homes.

A Victorian-style roof is a particular feature of Victorian-style homes. This type of roof design was developed from 1800 to 1900 when Queen Victoria of England reigned. A Victorian roof is marked by intricate fascia boards and multiple peaks having different styles, pitches, and slopes. Victorian-style roofs have become one of the most sought-after styles among English, North American, and Australian homeowners because they depict a luxurious, castle-like character, and add striking detail to a home. 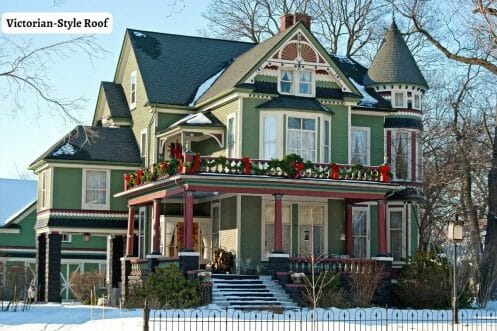 This is a roof type with one slope. The slope of your roof will depend on your architectural preferences and local weather conditions. Ideally, it should have a pitch suitable to shed water, ice, and snow down the side.

A mono-pitched roof is a type of shed roof. That’s because this type of roof was developed initially to cover small sheds and garages. Mono-pitch roofs are now being used on many homes with modern architecture and clean lines; they add visual interest to any minimalistic home designs of any size. 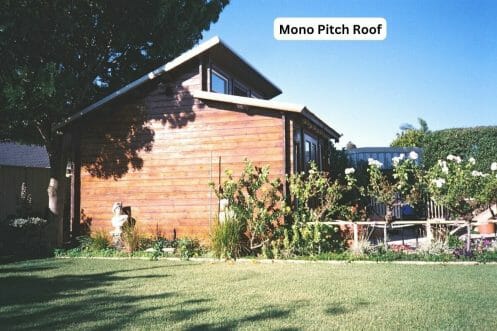 A roof with asymmetric peaks is a type of gable roof. It’s one of the most contemporary architectural looks, noticed primarily on minimalistic American homes. Two fundamental aspects of an asymmetric roof include:

These homes tend to be unique for their aesthetic purposes. Asymmetrical peaks provide homeowners with ways to renovate and design their homes that wouldn’t be possible with traditional types of roofs. Solar panels are found to be much more efficient on asymmetric roofs, and the different slops provide better wind and weather resistance than classic peak styles. 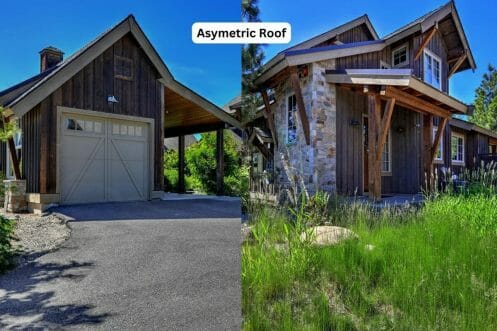 A-frame roofs are also called roof huts or roof cabins. It is a roof design where the roof slopes touch the ground, covering the exterior walls of a house. A-frame roofs are typically used on summer homes or cabins, but they’re now being used in the U.S. as a modern roof style.

The steepness of an A-frame creates a warm appearance for a home, with a unique, cozy character and attractive visual appeal. Since there are no overhangs on this structure, it provides better wind resistance and insulation than other roof types. This type of roof is perfect for homes in icy and snowy areas, and also helps you save on heating costs during winter.

Choose a style from these 11 worldly choices to create a unique, or luxurious look for your home. These are uncomplicated roof types that an experienced roofing contractor in your area can install for you. The best part? You can choose any material– shingles, slate, metal, or wood, and it will increase the value of your home without breaking your budget!

Along with the roof components, you can customize many more exterior elements to match your home’s architecture. If you live in Plymouth or the surrounding areas in Minnesota, we can build you the most beautiful, economical, and safe roof in your neighborhood and share more home improvement ideas. 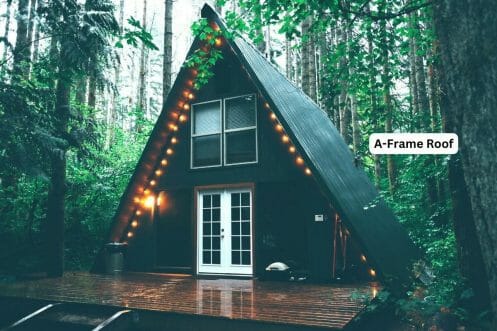 Do You Desire A Customized Roof Design?

At Excel Renovation, we have been improving homes and commercial buildings for years. Our award-winning team excels in service, creativity, and efficiency. If you need a customized roof replacement service for your home, cabin, resort, commercial space, or any other property, contact us at (612) 439-5005. We will be happy to offer you a free consultation and estimate.

We are a part of the Minnesota community, so you can rest assured that our knowledgeable team knows which type of roof suits the weather, residents, tourists, and businesses when they visit, settle, or set up a business here.

Roof Inspection Checklist: Making Sure Your Home Is Safe
20 Roof Components Every Homeowner Should Know